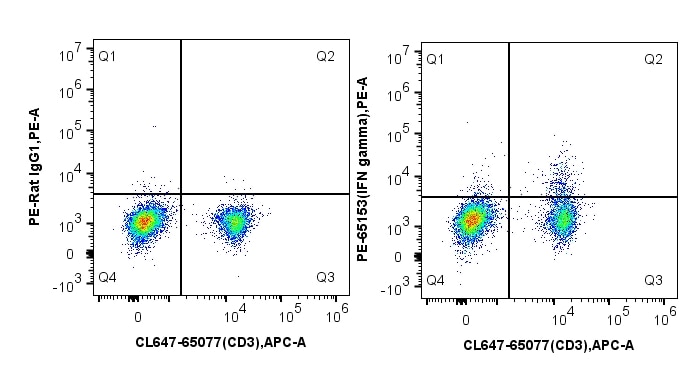 This reagent has been tested for flow cytometric analysis. It is recommended that this reagent should be titrated in each testing system to obtain optimal results.

Interferon gamma (IFN γ), is a type II interferon that provides immunity against bacterial, viral and protozoan infections. In its active form, IFN γ is a glycosylated, non-covalently linked homodimer of 29-32 kDa subunits. It is produced by a number of immune cell types including natural killer cells, natural killer T cells, and effector lymphocyte T cells following antigenic and inflammatory triggers. The IFN γ dimer binds to its cognate receptor which has two subunits: IFN-γR1 which is the ligand-binding chain (α chain) and IFN-γR2, the signal-transducing chain (β chain). Binding to the receptor activates the JAK/STAT pathway which in turn activates IFN γ responsive genes. While IFN γ can inhibit viral replication, it also works as an immune-modulator and immune-stimulator by increasing surface expression of class I MHC proteins. (PMID: 19268625; 10688427)